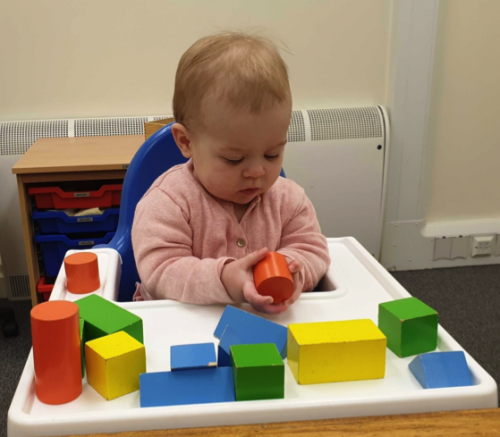 Ten-month old infants at an elevated likelihood of being diagnosed with autism or ADHD reach across their body less than those who are not, shows new research led by AIMS-2-TRIALS partners at the Birkbeck Baby Lab in London.

Previous research has shown that general motor skills differ between infants with an elevated likelihood of autism or ADHD diagnosis and those with typical likelihood. The present study aimed to take this further, by investigating whether a specific type of motor skill – ‘midline crossing movements’ – follows this same pattern. Midline crossing movements describe, for example, using the left hand to pick up an object situated on the right side of the body.

Autism has a strong genetic component and is known to be heritable within families; infants considered to be in the elevated likelihood group were those with a first-degree relative, such as a parent or sibling, with a diagnosis of autism and/or ADHD. The other group of infants did not have a first-degree relative with any known diagnoses and were considered to be of a typical likelihood of receiving such a diagnosis. Both groups were studied at three key ages: 5, 10 and 14 months. At each time point, the infants were observed playing independently with toy blocks, while researchers recorded the number of toy interactions and amount of cross-body movements at a ‘rate per minute’, for a maximum of 3 minutes.

At around 5 months of age, infants typically begin to learn motor skills involved in reaching, enabling them to play and interact independently with the world. The study found that at this time-point, both ‘elevated’ and ‘typical likelihood’ groups made similar amounts of cross-body movements. However, at 10 months, those in the typical likelihood group made significantly more than those in the elevated likelihood group. By the time the infants reached 14 months of age, the amount of cross-body movements were again at a similar level in all groups.

Some might assume these findings suggest that infants at an elevated likelihood of autism/ADHD are slower to develop motor skill development because they make less cross-body reaching movements at 10 months old. Dr Jannath Begum Ali, who led the research explains this is not necessarily the case; “It may mean that they’re using more efficient and comfortable ways of learning motor skills”.

It is hoped that this research will inform further investigation into motor skill development in what is known as a transdiagnostic approach, which considers developmental differences shared across neurodevelopmental conditions, rather than focusing on specific conditions alone.