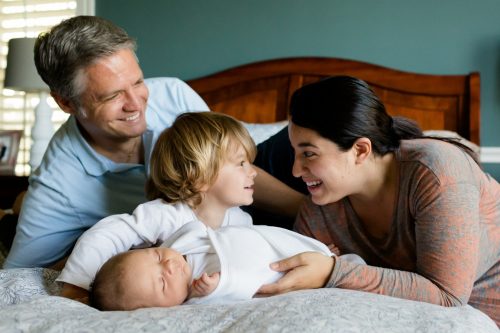 AIMS-2-TRIALS researchers have found that an infant’s ability to flexibly switch their gaze from one object to another (visual disengagement) differs based on their biological sex (male/female) and their socio-economic status (a measure of how income, education, and occupation affect social status). These results are important because in other studies delayed gaze switching has been linked to issues in later development, such as social communication difficulties and an increased likelihood of an autism diagnosis.

The significance of attention

Visual attention can be described as focusing the eyes on one object whilst filtering out everything else. This provides a way to prioritise visual experiences and is a key part of development. Attention is studied widely because it is such an important ability, which emerges in early infancy – for example, newborn babies will orient their faces to their caregivers. Gaze switching then appears at around 3–6 month’s old. Since infants cannot yet speak, visual attention is their primary way of interacting with the world and this could be why it has a big impact on later communication and development.

In this study the researchers explored how visual disengagement is related to other early behaviours, such as motor skills and social communication skills, in 5-month old twins from Sweden. Throughout the research task, each infant sat on their parent’s lap facing the monitor of an eye tracking device, which uses a set of cameras under a screen to track their eye movements. The study used an infant-friendly version of a standard method called the Gap task. This task measures how quickly  young infants can switch their gaze from a central object on a screen (e.g. a clock) to an object appearing towards the edge of the screen (e.g. a ball) across different experimental conditions, one of which features a short delay or time “gap” between when the central object disappears and the peripheral object appears.

What the findings mean for autistic people

Previous studies have linked gaze-switch delays to an increased likelihood of a later autism diagnosis. This raises the possibility that measures of visual disengagement in infants could potentially be used as an early indicator that certain interventions may be helpful. For example, perhaps children showing gaze-switch delays in early infancy may benefit from techniques that support social communication and language development. However, more research is needed in different populations, both outside of Sweden and in countries with a greater economic divide. In this particular study, the mothers’ level of education (a common way to estimate socio-economic status) indicated a higher number of mothers with high socio-economic status than the general population in Sweden.

Future research projects are planned with this same group of twins. Given that the infants in this study were just 5 months old, it is not yet known which twins will go on to receive a later autism diagnosis. However, over 400 infants took part in this large study. With such a large number of children in the study, it is likely that some will receive an autism diagnosis in the future. The researchers plan to assess the children at 3 years old using ADOS (Autism Diagnostic Observation Schedule), which is a standardised diagnostic test for autism. It may then be possible to draw further conclusions concerning the links between gaze switching and later autism diagnosis. One possibility could be to investigate whether biological sex differences in gaze-switching relate to the differences in how autism presents in the different biological sexes.