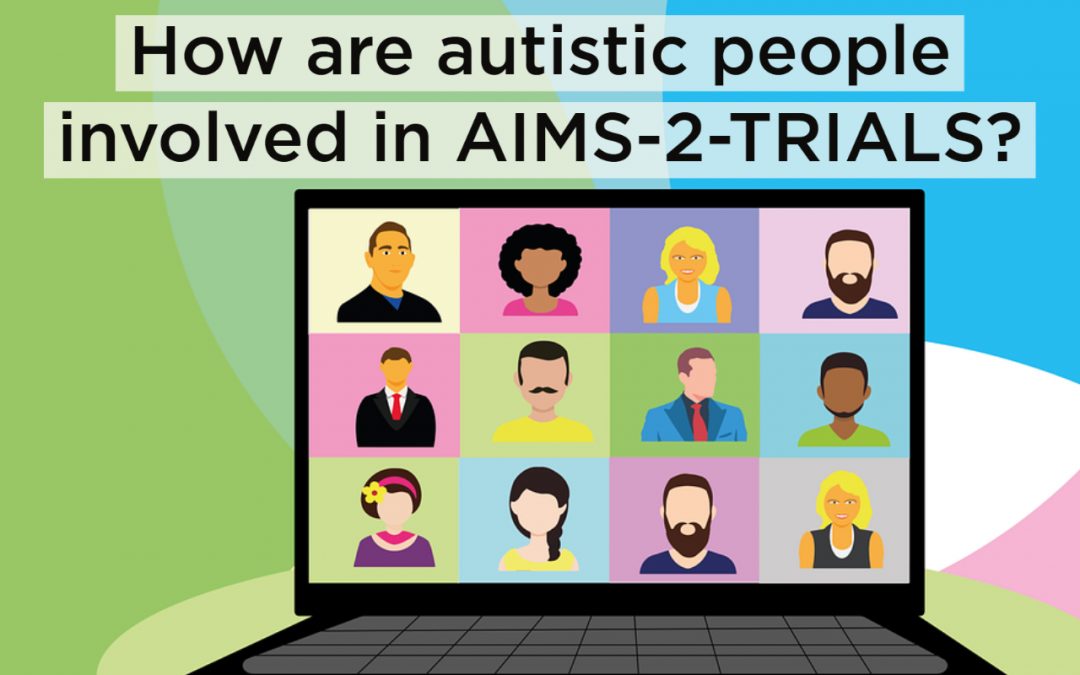 Autistic people have long made the case that they should be involved in research about them and many researchers now consider this to be part of the standard research process. This involvement is sometimes referred to as ‘participatory research’ and can be done in a variety of ways, leading to different levels of impact on the research. Researchers are encouraged to involve autistic people from the inception of their research idea and throughout, ensuring that comments and suggestions are heard and acted on wherever possible. 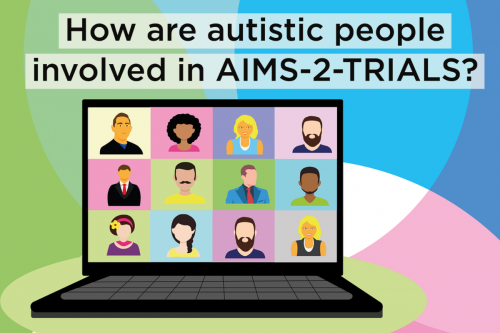 The conception of the A-Reps group

The AIMS-2-TRIALS A-Reps group could only be created once the project commenced and grant funding was available. As a result, the group was not included in the early stages of project design. This has led to criticism because some key decisions had been made before the group was recruited, including which topics, medicines and biomarkers to study. As facilitators of the A-Reps group, the University of Cambridge team will continue to communicate to researchers across the consortium about this concern – including senior managers – so that they can consider ways to address it in future grant applications.

Involvement of autistic people is also important at the grant conception stage when funders are deciding what type of research to fund. To this end, since AIMS-2-TRIALS began, the IMI has introduced a new scheme, which allows those directly affected by the conditions being researched, as well as parents and carers, to:

Inclusion of members of the public at these crucial early stages is a positive step towards enabling autistic people to have a voice within any IMI research relating to them.

Getting the group in place

Once the funding was available, Autistica (AIMS-2-TRIALS partner and UK-based autism research charity) identified a small group of interested autistic people and carers who agreed to act as a Steering Committee. This group gave early feedback on the AIMS-2-TRIALS website and worked to recruit the rest of the A-Reps. Nearly 100 European applications were reviewed by the Steering Committee, who attempted to form a group that was representative of the varying strengths, needs and difficulties of autistic people, demographic factors such as gender, age, nationality and ethnicity, life experience and interests. 41 A-Reps accepted our invitation to take part.

AIMS-2-TRIALS is likely the first large-scale consortium to invite a group of autistic people and carers to get involved across the entire project. This means that there was no roadmap to follow; no clear ‘right way’ to do it. The facilitating team at the University of Cambridge has been guided by what the A-Reps say they would like to engage in. Based on this feedback and requests from researchers, working groups have been set up around key topics such as ethics, biomarker discovery and medication development. These groups position A-Reps in meetings right alongside decision-makers including Prof. Declan Murphy (Project Coordinator), Dr Eva Loth (Work Package 2 Co-Lead), Prof. Emily Jones (Ethics Work Package Lead), as well early career researchers and representatives of other consortium partners such as Roche.

Again, because this is the first time that such a large consortium has attempted engagement with a group of autistic people in this way, it has taken some time to develop processes to connect the A-Reps and researchers, and procedures for reflecting on the extent to which the A-Reps feel listened to and were able to have an impact. However, right from the group’s formation, A-Reps have been able to ask questions about any of the projects or themes encompassed by AIMS-2-TRIALS, either by email or via a dedicated Slack platform, and the University of Cambridge team has sought ways to address them, either by asking researchers to respond or by arranging meetings. One ongoing challenge is ensuring that as many A-Reps as possible are involved in activities, and this is an issue that the A-Reps Steering Committee will continue to work on, potentially recruiting more A-Reps now that the scope of the role has become clearer.

To address early uncertainty about how researchers could involve A-Reps in their projects, and to encourage them to think about this as meaningfully as possible, the University of Cambridge team, with input from the A-Reps, produced a guide for researchers. This covers the process as it has evolved, from ‘what is participatory research?’ to ‘how can I involve autistic people if my project has already started?’, to ‘how meaningful has this been and how have autistic people and carers impacted on my project?’. This guide will continue to be updated to reflect learning about the process. 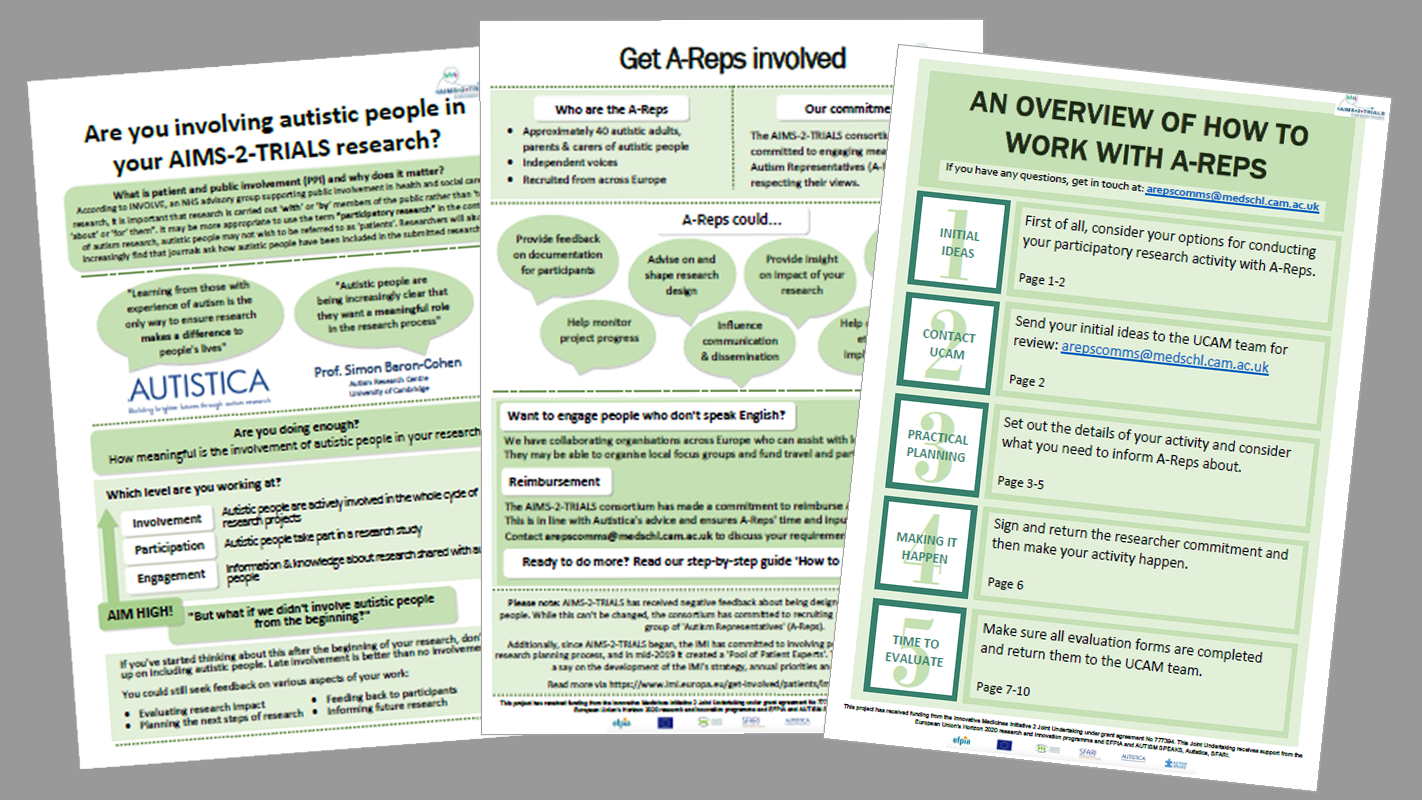 Snippets of the guide developed to help researchers engage meaningfully with A-Reps.

There are currently five working groups providing input on the following subjects:

Discussion with A-Reps during the first AIMS-2-TRIALS General Assembly led to acknowledgement of a need for a paid post dedicated to coordinating ethics across the whole consortium. As a result, an entirely new post was created, its job description significantly improved via ongoing consultation with A-Reps, and its funding sourced from contributions from budgets across the consortium. The role is being advertised at the time of writing (February 2021).

Professor Emily Jones, Birkbeck University, said “Through working with A-Reps within the Biomarker and Ethics Working Groups, I have gained new perspectives on autism research. Conversations with the A-Reps have influenced our research directions, for example leading us to initiate a new line of research on the meaningfulness for autistic people of common outcome measures. The experience has also allowed me to reflect on the broader context of our research programme, and how the ways in which it is both communicated and conducted intersect with the views and wishes of autistic people.”

The working group to decide a medicine for the second AIMS-2-TRIALS clinical trial included members of the A-Reps group alongside researchers. Through this, A-Reps were able to influence the decision made and vote along with researchers.

Lead researcher Celso Arango said “I am really proud of the way we have included autistic people in the decision-making process to select a compound to the next clinical trial. A-Reps had an equal vote in this process, with each of their votes counting the same as a researcher or industry partner on the Trials Advisory Board.”

It is important for A-Reps to understand the AIMS-2-TRIALS research so that they can contribute and ask questions. A-Reps have varying prior experience; some are researchers, medical professionals, or trained in a related field; for others, research ideas are quite new. To give all A-Reps an opportunity to learn more about different aspects of the project and engage in discussions with researchers, the University of Cambridge team arranged a webinar series specifically for A-Reps, which started in 2019 and included sessions on biomarker research and autism genetics.

In September 2020, a new webinar series was launched, with sessions held approximately every month. Researchers present to the whole consortium, including A-Reps. These webinars give A-Reps a chance to learn alongside the researchers, who will themselves not all be aware of the full range of research being carried out by other sites. As always, there is the opportunity to ask questions in these sessions. It can be extremely challenging for researchers to present their complex science in a way that is accessible to their scientific peers, other scientists who may not have a background in their particular field of expertise and lay-people, all in the same session, and this is an area that the consortium will continue to work on, with the support of the AIMS-2-TRIALS Communications Team based at the University of Cambridge.

Other contributions to the project

A number of research studies in the consortium have made use of the A-Reps’ expertise and guidance. ‘STAR AIMS’, sought feedback on information and consent forms via study co-coordinator Maria Megalobeni at KCL, while Myrte van Langen, University of Utrecht, requested feedback on adaptations to a measure of stigma for the LEAP study.

There are also periodic opportunities for A-Reps to deliver presentations and training to researchers, such as in a June 2020 training session for the Early Career Researcher Autism Network (ECRAN). Here, several A-Reps presented about the need to include autistic people in research about them. Feedback about this session was extremely positive.

Finally, as of March 2021, regular informal meetings are being organised via Zoom to allow additional contact between A-Reps and researchers.

Regular updates about A-Reps activities and developments will be posted here.