Brain and Behaviours in Early Life

A series of studies will track how the brains of babies with an increased likelihood of autism develop from before birth and into early childhood.

The research will give a unique insight into how subtle differences in brain structure and activity may influence an infant’s behaviours and likelihood of developing autistic traits, such as social difficulties and repetitive behaviours. Identifying which infants may develop these traits later in childhood would allow support, such as play-based therapy, to begin earlier than is possible today and at a point when the brain may be most likely to change.

The first study will scan babies’ brains during the third trimester of pregnancy (around 34 weeks), and the second shortly after birth. Both studies will be led by King’s College London. The third study will track the infants until they are two years old, using further brain scans at around six months (also led by King’s College London) and measures of their genetics and how they think and behave (led by Birkbeck College, London).

All three studies will take detailed, three-dimensional images of the brain’s structure using Magnetic Resonance Imaging (MRI). This method is safe and used routinely in healthcare and medical research. For new-born babies, it will involve falling asleep naturally on a bed that is moved gently inside the scanner. The images will give a close-up view of the brain’s size and structure, and of the wire-like connections that transmit information between different brain regions. The strength of these ‘wires’ and the patterns of activity across them are crucial to how we think and perceive the world around us.

In the third study, brain activity will also be measured with a technique called electroencephalography (EEG). This involves placing small sensors on the infants head to record the electrical activity that their brains produce naturally. The sensors record but do not emit electricity and are painless. Infants can sit on their parent’s lap or play with toys during the recording. In a separate part of this study, researchers will track the infant’s eye movements to show what they choose to look at most. One possibility being investigated is that infants who go onto develop autism pay more attention to objects than to people or pictures of faces in early childhood.

Measures of brain and eye activity will be analysed together with observations of the infants’ behaviours, in order to learn about their temperament, language skills and ability to move. It is thought that an infant’s early behaviours affect their ability to learn, which in turn affects their future behaviours, in a continual and cascading pattern. The idea that a person’s behaviour is the result of both their genetics and environment is called their “phenotype”, which is an observable characteristic or trait. The official name of this study, the third in the series, is PHENOCADES, which is a combination of the words phenotype and cascades.

The third study in this series will look at the infants’ genes. There are many thousands of genes that together orchestrate brain development. Variations in any of these genes may subtly affect an individual’s likelihood to develop autism. This could explain why infants are more likely to develop autism if they have an autistic parent, from whom they inherent some of their genes. However, each individual gene is thought to have only a small role in what is a complex and dynamic process, and which is further influenced by the environment. As there is no single genetic cause of autism, it is incredibly unlikely that a test during pregnancy could identify babies likely to develop autism. This is different to Down Syndrome, in which a test is possible because the condition results from a single genetic change. AIMS-2-TRIALS  is not developing a genetic test for autism and is ethically opposed to eugenics.

There are two rare genetic conditions that are associated with autism in around one in every hundred autistic people. These conditions are called Phelan McDermid Syndrome and NRXN1 deletion and will be the focus of a separate study in AIMS-2-TRIALS.

The series of three studies on development in babies before birth and into childhood aim to build a picture of how the brain develops over time and how this development affects infants’ behaviours. This may ultimately help to provide tailored information to families about which support, if any, may best help their young child to develop and reach their potential.

“Our goal is to understand the developmental mechanisms that shape how children learn about the world. This will help us to better identify and support infants who might need additional help to reach their full potential,” says Dr Emily Jones, of Birkbeck College, who leads the PHENOCADES study.

Brain Imaging In Babies – Get involved

We welcome you to apply if you are currently pregnant, or have recently given birth and have at least one of the following:

What are we studying?

We want to better understand early brain development. We use MRI to safely scan baby’s brain before or shortly after birth and follow-up how your baby develops for 3-4 years. We are interested in brain development in general and we have some specific questions. For example, we would like to learn about your baby’s family history, including whether your baby has a close family member with a condition like Autism or ADHD.

We have also been given ethical approval to include testing for COVID-19 and the immune response in the mothers and children participating in our study. This may give us an opportunity to better understand how mother and baby respond to infections.  We welcome mothers who have had a positive COVID-19 test during their pregnancy to join our study.

How will it help autistic people?

We hope that this research will help us to better understand early brain development in all individuals but especially those with a family history of autism.

You can get in touch with a member of the BIBS team by emailing us at bibs@kcl.ac.uk 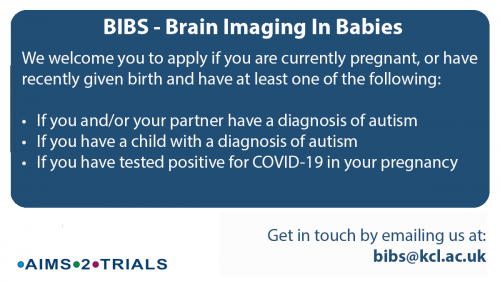 The leaders of each study are:

From birth to two years